Hello, everyone! This is my first go at a challenge so let’s see how it goes.

I’ll start off by putting down some bullet points of what kind of character I wanted to create:

One problem I might run into is that it will look too much like a druid however I’ll try to covey a sense of twisting/abusing nature instead of harmony with nature. With that in mind, here is some lore about the character:

Current Progress (picture will be updated): 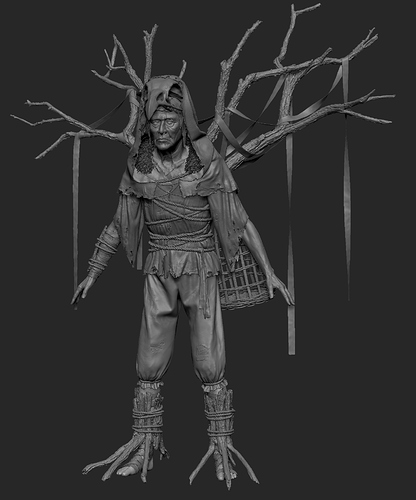 Here is my first blockout of the character. Like I mentioned before the character tries to mimic the appearance of his patron with his clothing. All of stuff that he carries should be scavenged and processed by himself. the branches that are tied to his torso should not only look like something like boney wings but also function as a way he can carry his undead birds around. To get the hunched over look that vultures have i put a fur collar under the cowl.

I am not sure if I should hang something like wicker birdcages from the branches in the back since it might mess with the silhouette too much. If somebody has some more ideas of accessories that can be put on him feel free to comment.
Comments and Critiques are highly appreciated! 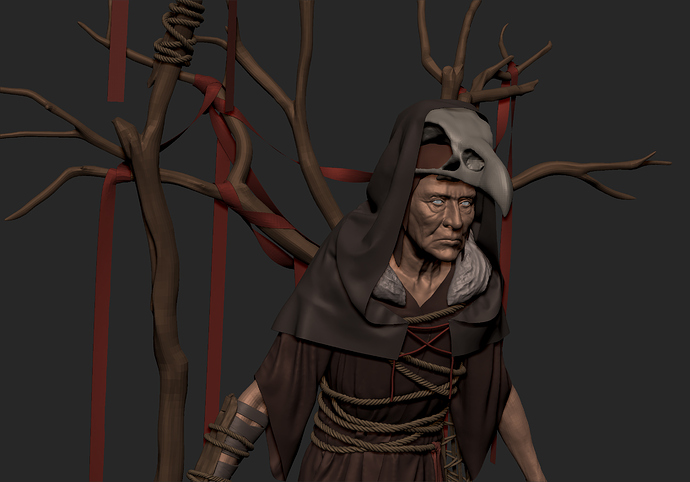 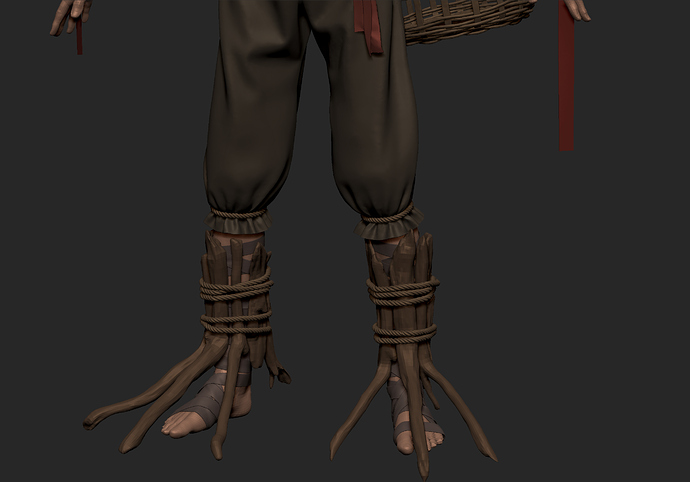 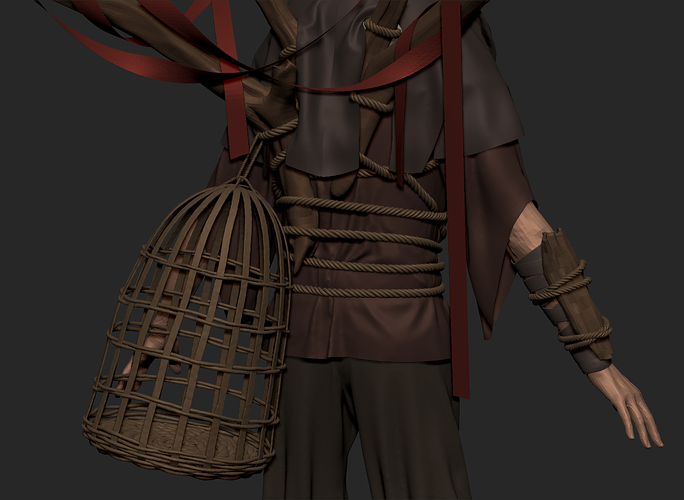 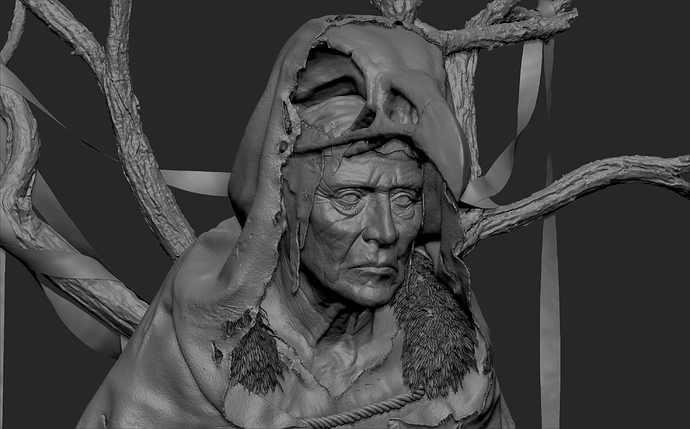 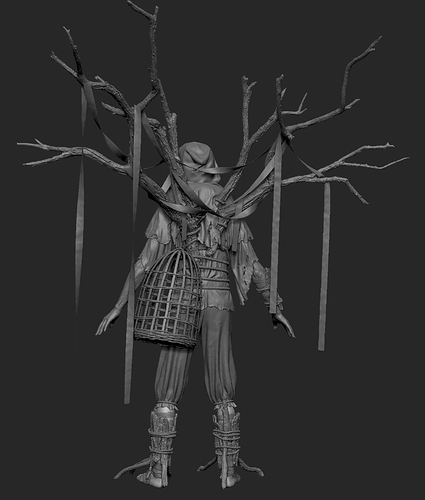 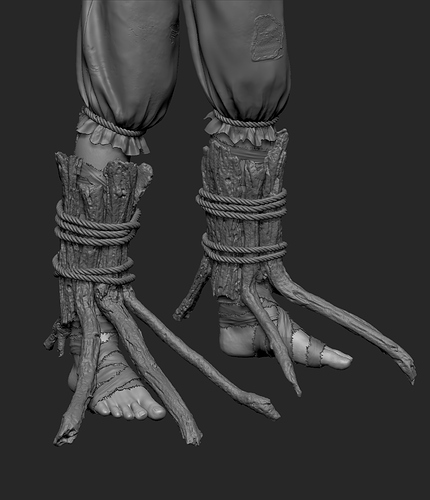 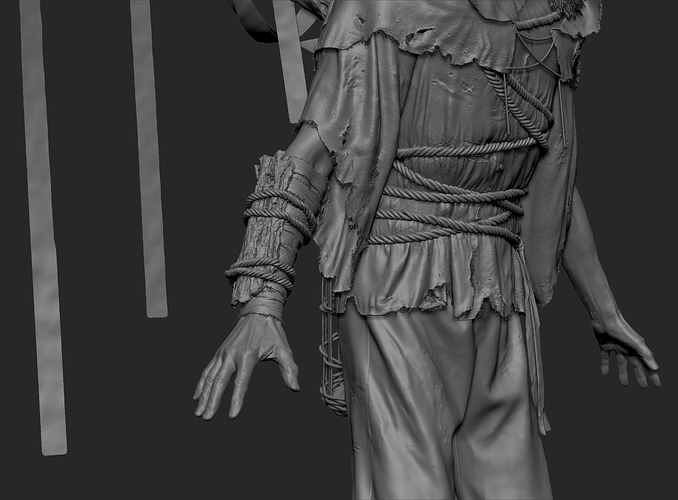 How did u do the wear and tear for clothes ?

For the cloth, I kept it a thin plane until I finished the larger wrinkles and holes. Then I used panel loops to give it thickness and get a free playgroup for the border. Then I create fiber mesh on that group and mask it so that it doesn’t spawn around the entire rim. The rest us just surface noise and some alphas. I hope to bake the normal and alpha from this in the end. The actual fabric pattern I will do later when texturing. 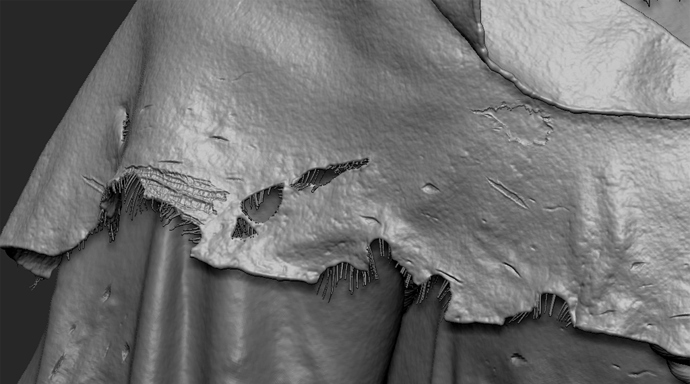 That is really high quality stuff man! Excited to see the rest of the progress

Maaan., i love those “shoes”. So cool

Thanks @Dmumah and @knecksewn! Already excited for some topology and texturing. 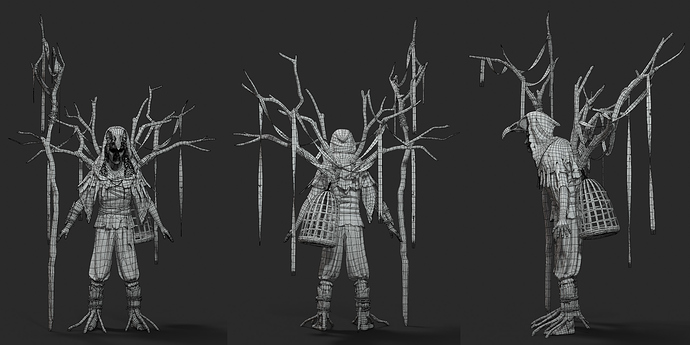 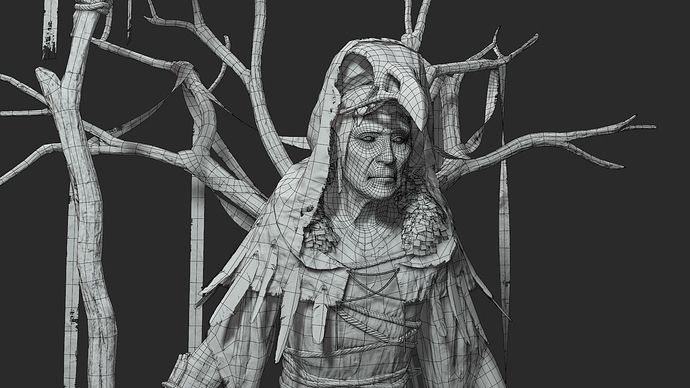 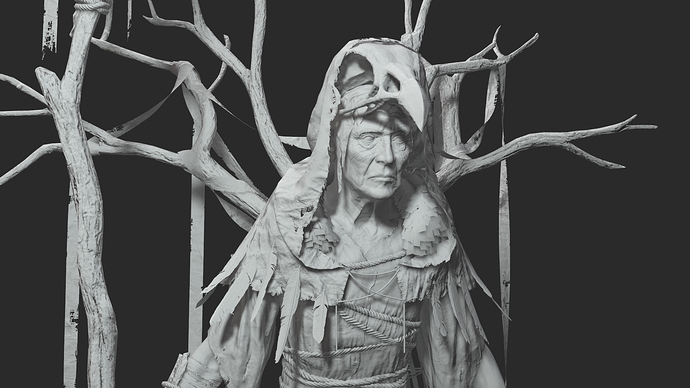 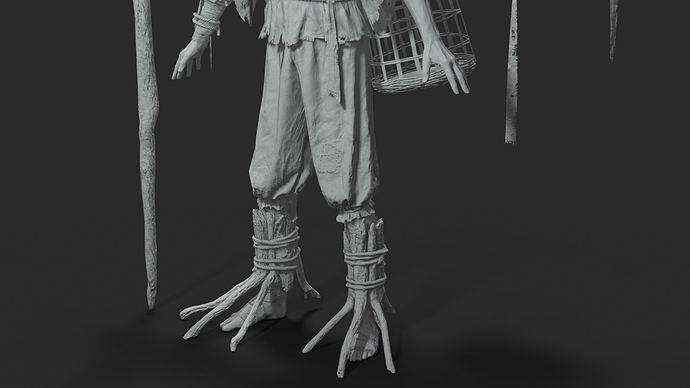 Created Fur Card Textures using xGen for the base textures and later tweaked them in Substance Painter. I added them scaled-down in one of the 4k sets. 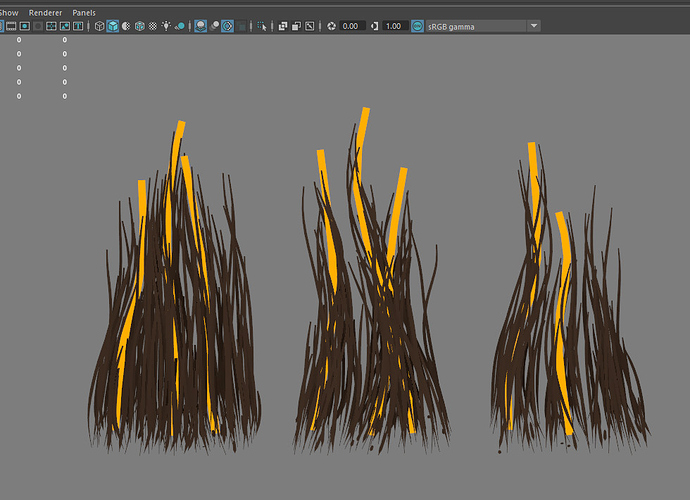 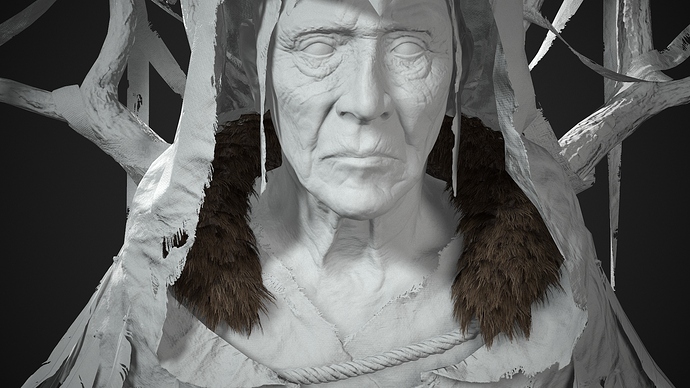 Man your baking skills are just outstanding!!
Can you please elaborate a little about your process? Is it the classic high to low painter process or did you do anything differently because these results are damn impressive my friend!

Thanks!
Yes, it is baked in Substance Painter by making heavy use of the bake by mesh name feature. If I have anything that is really close to each other like the sleeves and his torso I separate them into 2 different poly shells so that they don’t bake onto each other.
I also did multiple bakes (1 far distance, 1 close distance, and a couple more specific ones based on the object) so that I can paint out any errors.
I hope that helps! 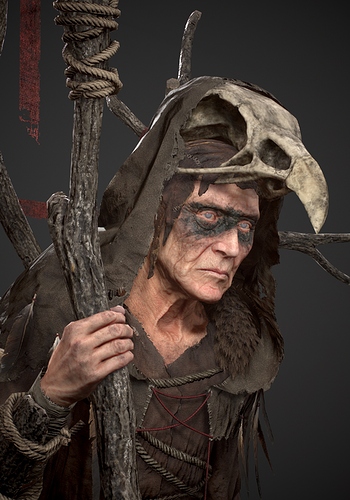 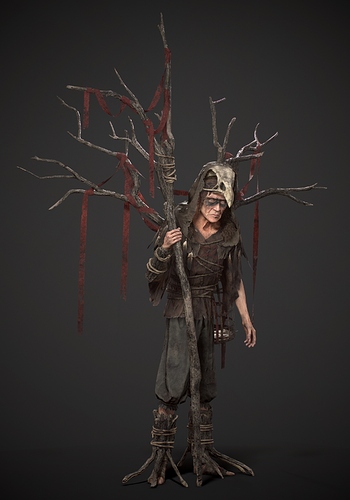 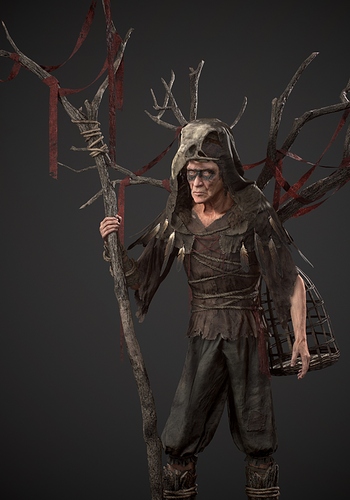 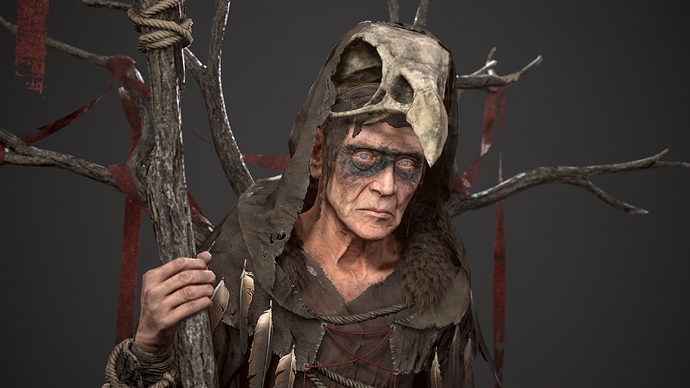 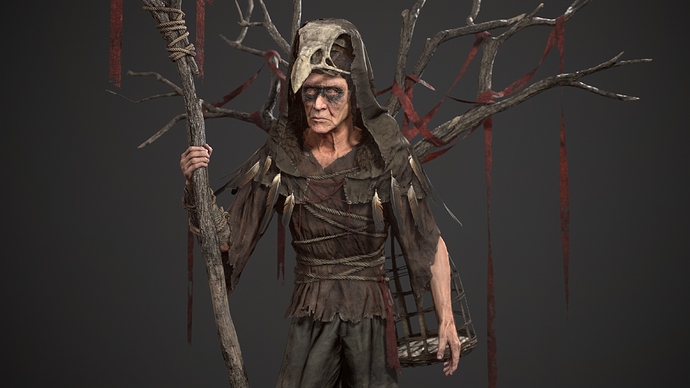 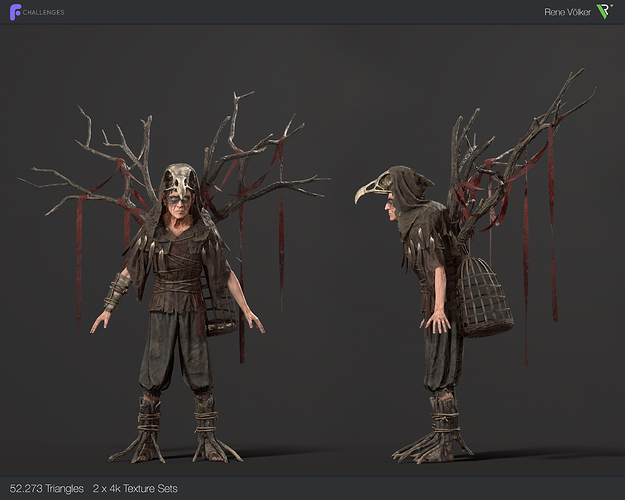 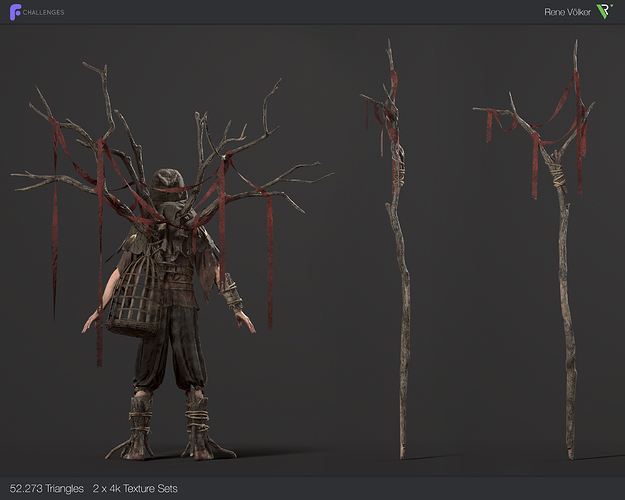 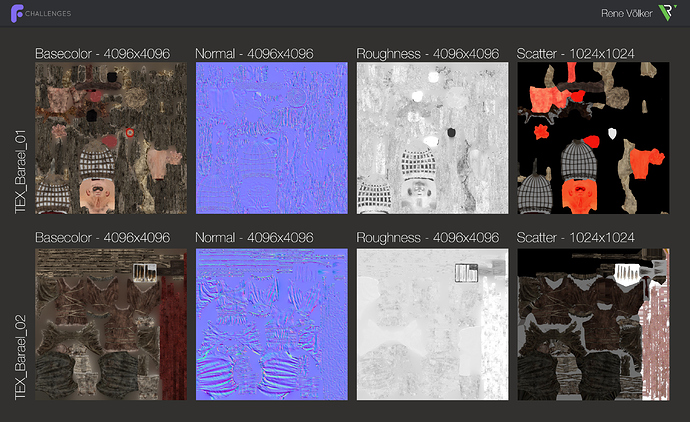 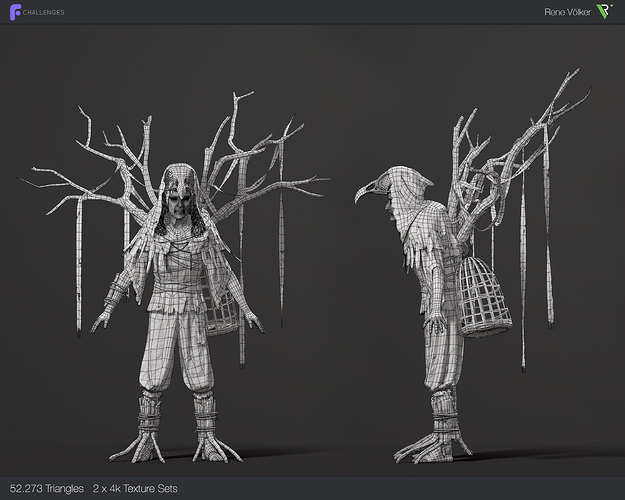 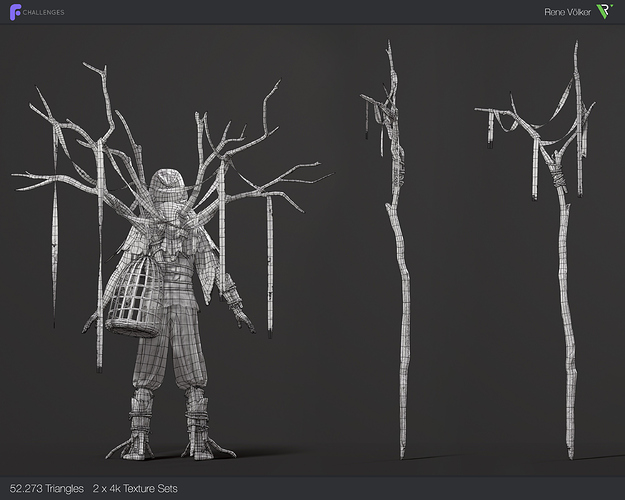 @Rene This is some beautiful work.

Thank you! I had a lot of fun on this one.

This came up so beautiful! I really dig the design.

And again, the baking is off the charts mate.