Lore (This was made in one sitting so it will probably change, I just wanted to get something down for this)

There once lived a man Alin, he was regarded as the best cook at the local pub in the small town of Pondcall. One day a traveling sorceress walked in on a slow day. Upon ordering her meal, Alin saw her sitting at her table waiting for her food. Alin quickly prepared her order and personally delivered it to her table. The two quickly began to talk as the sorceress ate her meal. Alin found out her name was Ivys. When she finished her meal, Ivys told Alin that she was gonna stay in town for a few days but had to leave to continue her search for the knowledge the world had to offer.

As Ivys left the pub, Alin felt great sadness come over him, someone so charming as Ivys was a person that you would only meet once in a lifetime. But, what could Alin do about it? Being a mere cook, he had no skill in mage craft, he can use a knife but merely for preparing various dishes. He was unfit to travel with her as he would only be a burden to Ivys. That is, until a mysterious voice whispered to Alin. The voice told Alin that he can grant him the knowledge of magic, even magic on par with Ivys or stronger. Alin was suspicious and asked what the cost of such knowledge was. There was no response at first, but then the voice told him that he would need to tell Ivys about his pact and gather certain material as he ventured throughout the world. Alin thought about it for a few days and every day Ivys kept going to the pub for food while she was in town. On the final day Ivys was at the village, Alin approached her at the entrance and asked to travel with her, he explained everything to her as the mysterious voice demanded. Hesitant at first, Ivys decided that it would be best to have someone else to travel with for safety purposes.

They eventually found a small village near one of the capital cities, it was a quiet place and had the advantage of being near one of the cities outposts. They bought a small house and got settled in, Alin found a job at a pub as a cook and Ivys tended to the house. Shortly after settling down Ivys asked Alin about his patron, she thought it weird that it would be alright with them settling down and not being able to gather material for him. Alin was contacted by his patron and was told to wait till night and to meet at the town center.

As the night rolled around, Alin and Ivys met at the center of town like the patron asked. All of a sudden there was a ring of light around the perimeter of the entire town. The patron spoke to both Alin and Ivy and told them that once a pact is made there is no breaking it, of course, unless they are willing to make a deal. The patron gave them the option of sacrificing the entire towns people to break the pact, or to give their own lives. Both Alin and Ivys knew that they couldn’t sacrifice the lives of the townspeople for their own mistakes, but yet, they were worried about their child. The patron saw they were concerned and added that their child would not be killed if they were to sacrifice themselves. The two braced for the worse as the decided to sacrifice themselves to end the pact and save the townspeople. The patron laughed and thanked Alin for the final ingredients. The final ingredients the patron needed were human lives. As the light around the town faded Alan and Ivys fell to the ground, their eyes rolled to the back of their heads and their corpses began to move towards one another. Ivys’ front opened up and began to consume Alin. After Ivys finished consuming Alin she began to quickly shrivel up. Then after a moment of silence, two bony appendages ripped Ivys open and began to pull something out. After a few seconds a creature rose up, this shriveled being was feeble, had legs that were so frail wrapped in skin and a ribcage, dark skinned, and resembled a small child. The child like being looked down at Ivys corpse and it let out a blood curdling cry, waking everyone up in the town. The child cried over the corpse of its mother and as people got closer to the child, it began to cast the spells that Ivys had studied and mastered in her years of training. The spells laid waste to anything in its path. The entire town was reduced to rubble and ashes in a matter of seconds.

The child, still crying from the loss of its mother, saw a book rise up from the rubble and began to float towards him. The mysterious voice spoke to the child and told him this grimoire belonged to his father and that he is stronger than both of them combined. The child grabbed the grimoire and held it close to him. The patron told him that his parents’ powers have been transferred to him in return for his life which in turn, means that he has a pact with the patron since birth. The child cried even louder and the patron said to him “My name is Azrael, and you are my reaper. Go forth and bring me the lives of those who disrespect my name and those who wish to break my pact like your parents were foolish enough to attempt. Your life belongs to me, Oust” The child scurried off into the woods, cursed to travel the world reaping the lives of those who sever their pact and brave warriors who risk their lives to try to slay the child reaper.

Legend says that those who hear crying in the distance, never live to see the following day.

Description
So I figured I would join this contest after seeing their video on this. I don’t expect to win anything, but I at least wanna get my work out there. Due to poor choice in University, I didn’t exactly get the best education in 3D stuff. So I’m here to make something and see where I stand compared to everyone else entering. At the very least it would be cool to see what people think as I go or just to get some exposure while doing this.

Here is a rough sketch of what I had in mind. 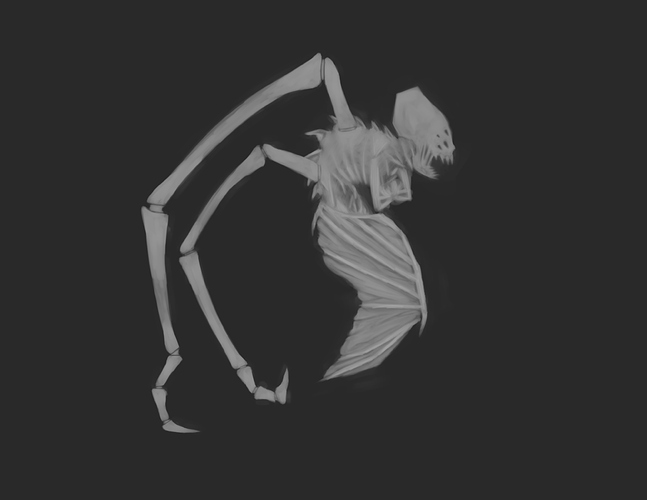 Update on the sculpt:

Been a little busy so I haven’t had too much time to work on this like I would have like too. But we are slowly making progress.

Update on the sculpt. Man, got buys and with other things and got kinda set back. Hopefully I can get this ball rolling faster so that I can get to the other parts of the processes soon.

Anyways, got most everything laid out and am starting to get everything formed properly to hopefully get the finer details started soon. I also changed the head design. While working on the other design I didn’t exactly like how it looked so since this is my own design I figured there wouldn’t be any harm in changing it. 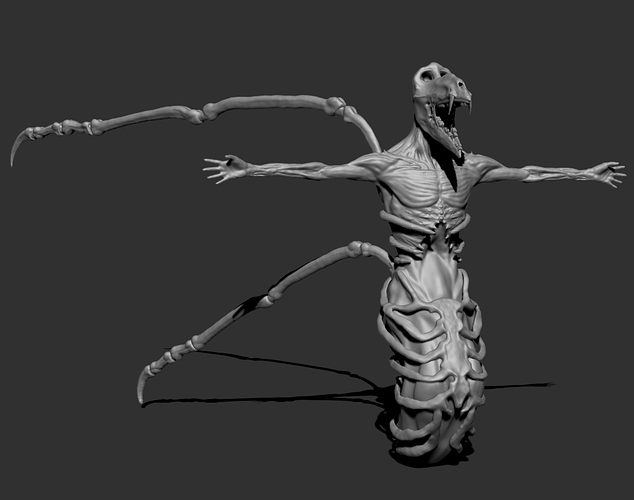 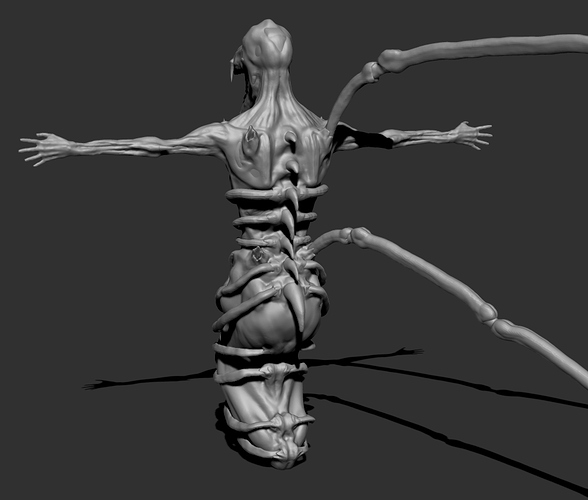