Hey everybody Mhiko here trying his second FlippedNormals challenge. Last challenge I feel I went a little too out of the box for my warlock so this time I’m playing it a little safer and following the little Red Riding Hood trend. So please wish me luck and let’s see how I do with her piloting a red mech wolf 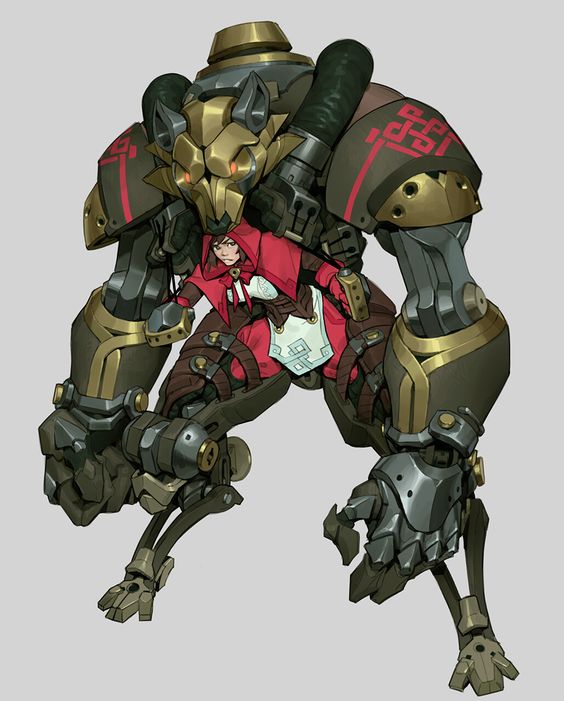 Let’s have some fun with this folks. Good Luck!

is this your concept?
id like to know who the artist is and how epic it would look in 3d

Hey Gloria, no this isn’t one of mine. This particular concept is by an artist named Ian Su. You can find him on artstation, he even has other fairy tale concepts. And yes!! It would definitely look epic in 3d as is but I do want to mash this up with a few other ideas I have to make the piece a bit more my own

Had to finish another project before I could give this my full attention(https://www.artstation.com/artwork/q9n8xR) but I am done and I’m ready to dive in completely. Spent the day doodling a concept for the robot wolf mech 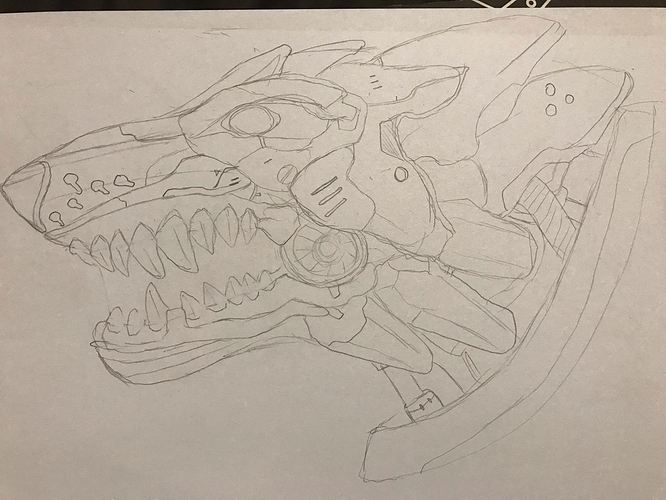 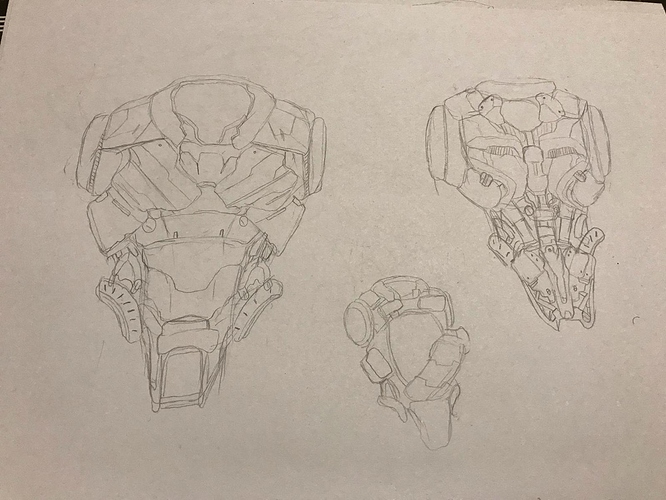 Think I have my head and Torso. Will start modeling them now whilst I figure out the arms and legs 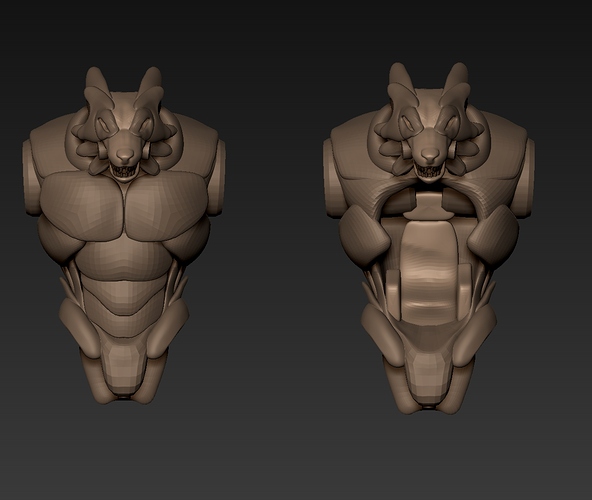 Started blocking out the pieces for the wolf’s head and torso, and the pilot cockpit. Thinking I want my red riding hood to be a pre-teen, maybe with a bit of an attitude. Looking forward to seeing how this all comes out 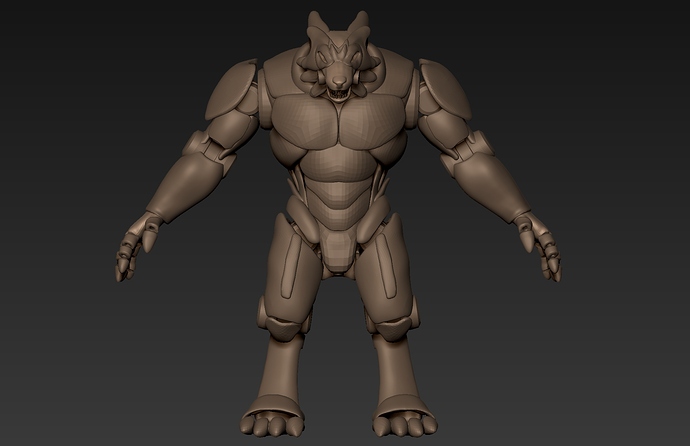 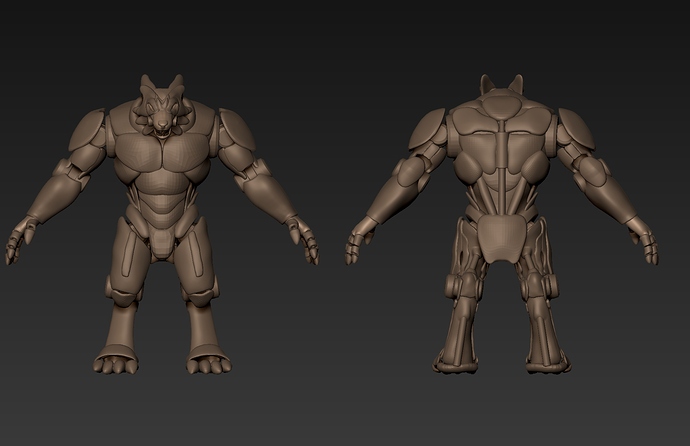 Been working on trying to rough out a good base shell and silhouette to start from. Not satisfied with the forearms and hands yet but once I find the right look will start cleaning everything up for either zmodeler or blender. Haven’t made my mind up on which I’ll use this time around but so far what do you think?

Very cool! I was waiting for this topic to continue! I like the way a wolf looks. I can’t wait to see the finished character! 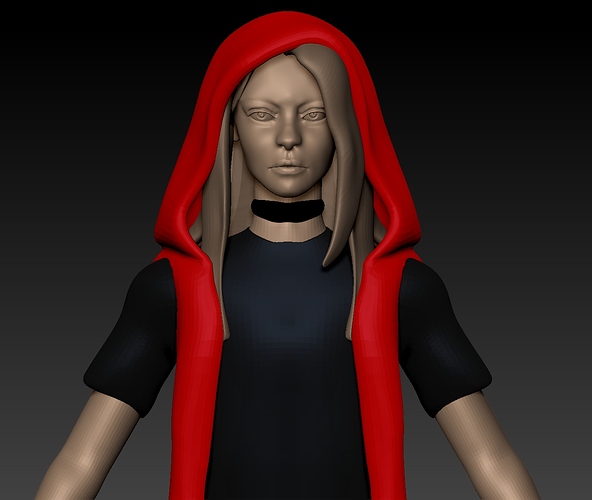 Took a break from the robot wolf to work on my pilot. The narrative in my head for my red riding hood is that she’s 15ish or so… Rebellious and lazy because she doesn’t want to be a mech pilot but because of a high aptitude for mech Combat and the fact that her strict and militant Grandmother is her Commander she has no choice but to do her duty. So want that to carry over in her demeanor and clothes 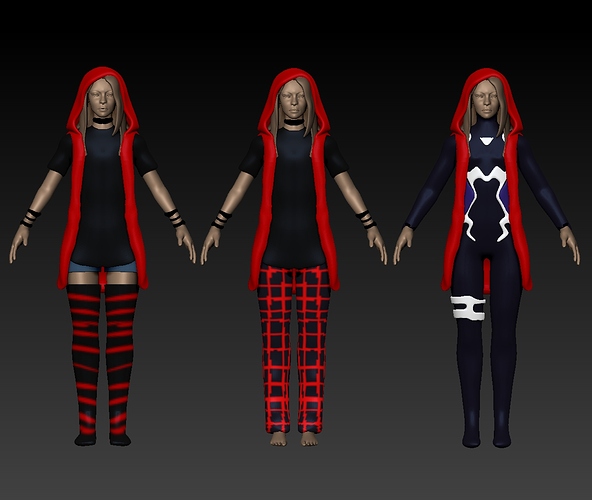 Clothes1280×1080 342 KB
I’m still trying to figure out what clothes would fit though so these are extremely rough explorations. Left is leggings, shorts and bangles which seems to be the uniform for the moody teens in our family, middle is pj bottoms then thought of having her eating in the robot whilst her grandmother shouts at her to emphasize that laziness and stubborn rebellion whilst the right is her in a pilot suit with a hoodie on top which doesn’t really carry the narrative but would suit if people only want to see a young girl in a robot wolf 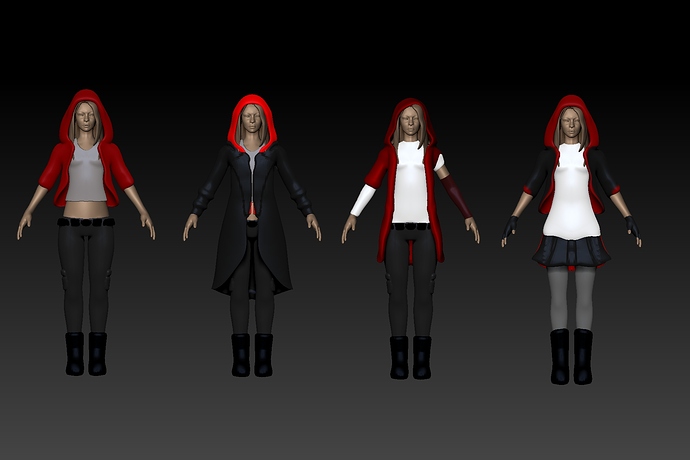 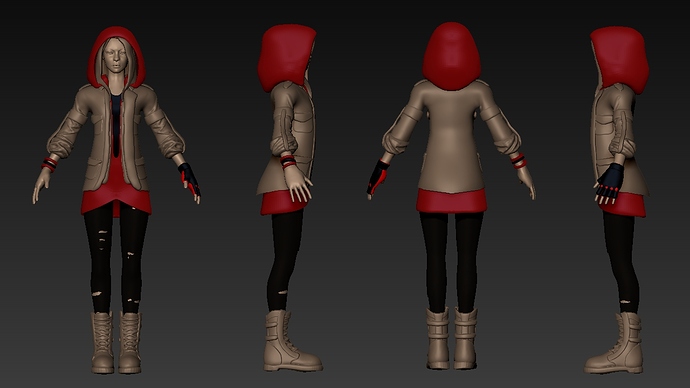 Think I have my pilot now, I just need to work on the clothing folds and polish her up a bit then will work on retopology. I don’t know if it’s right but I tend to do my retopology first so I can build up my HighRes details on cleaner topology 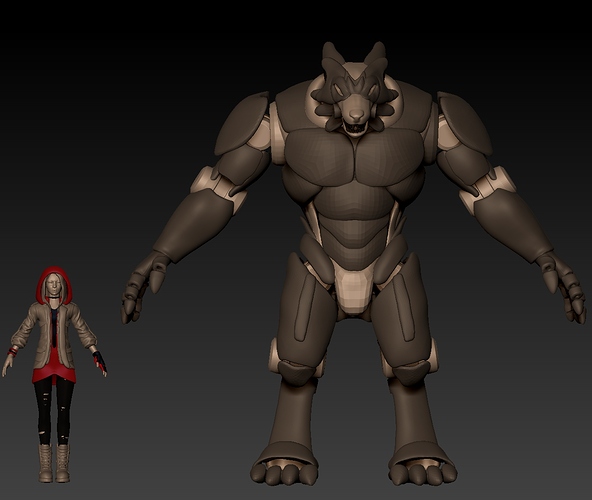 Just a little update on the full piece. Have already finished retopology for the pilot, her tights and boots, want to finish her jacket and hoodie by the end of the day. Wish me luck!

p.s. how do you change a thread image because I can’t seem to find the edit pencil by the title anymore 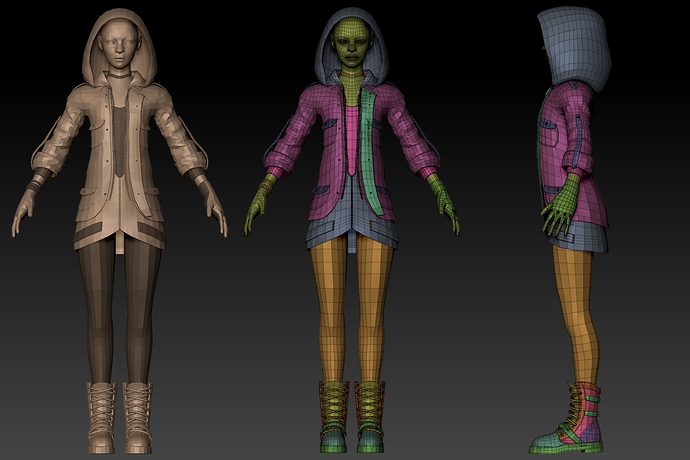 Well Red’s retopology is done, she’s around 40K Tris but I know that will jump up once I work on her hair cards but now that I know where I stand with her I can move onto refining my Wolf’s shells and details before I bring it into Blender for a second pass. I’m enjoying this 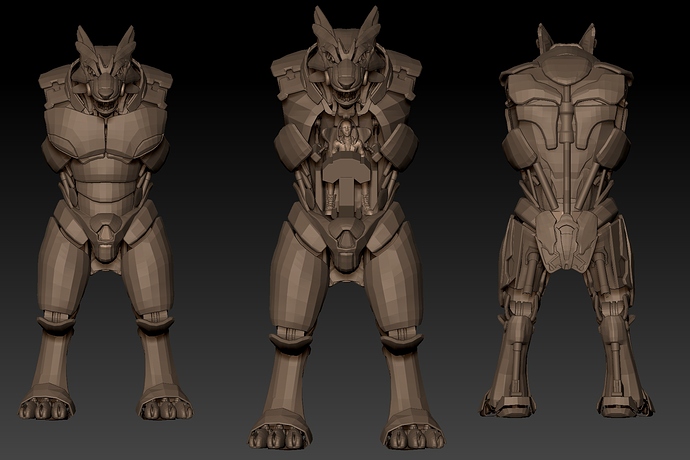 I’m still here. Had no choice but to take a break for a bit for health reasons so a little worried on whether I can finish such an ambitious piece in time. Wish me luck, I’m really going to need it

Good luck mate! Keep it up!

I can’t wait to see when its finished! good luck man! 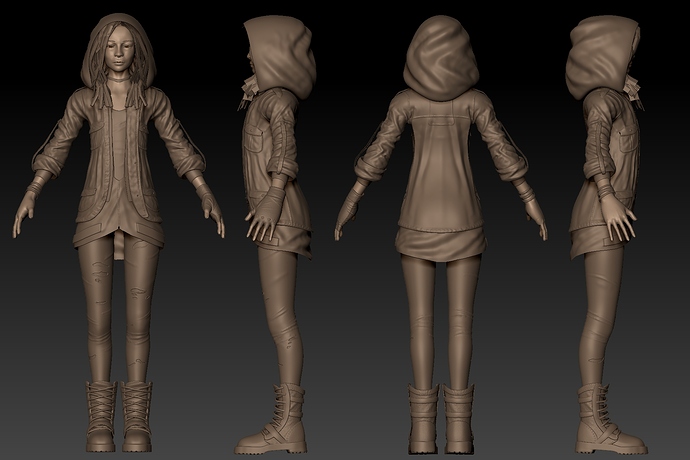 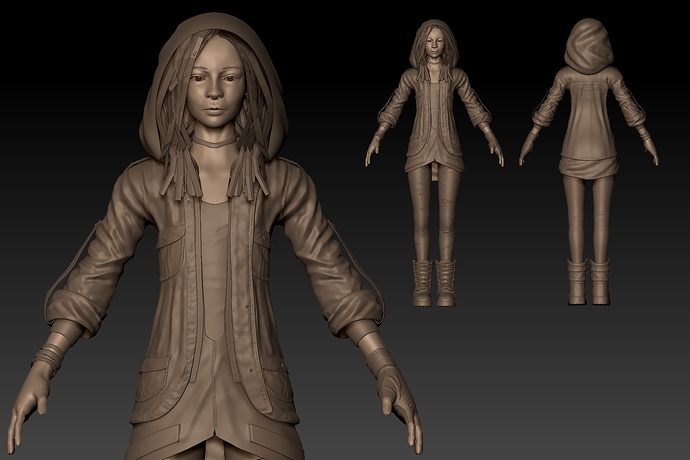 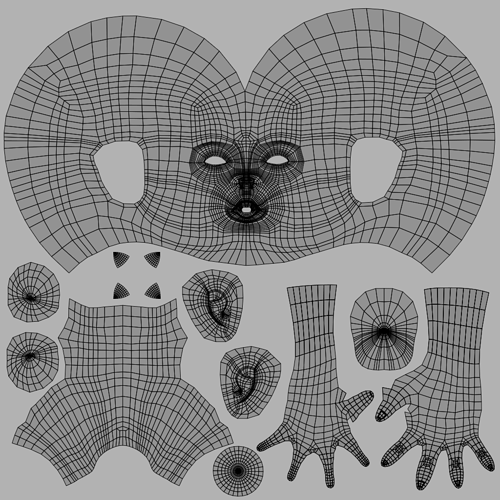 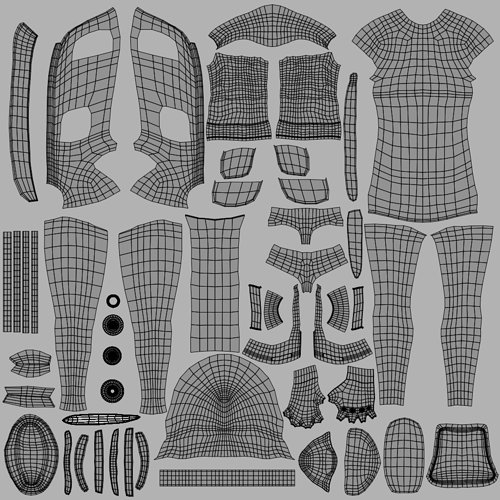 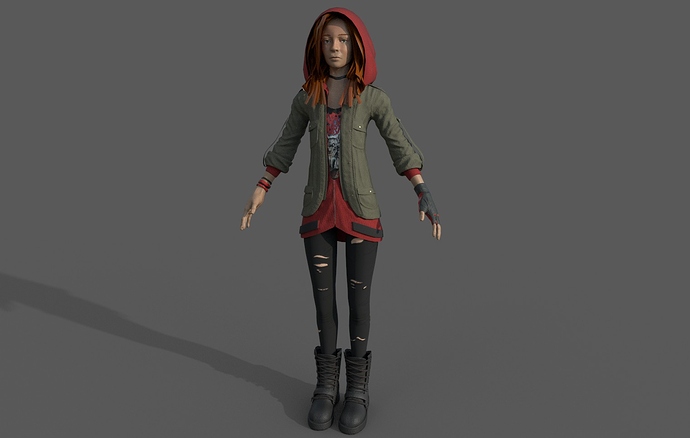 This is a bit of an art dump of all I did over the weekend. Will finish her up tomorrow so can focus on finishing the wolf. Its going to be interesting to see if I can finish in time

Wow you fast! How many UV sets do you going to make?

haha thank you very much. Umm at the moment its 2 at 2K each but i guess it will count as 3 since I did hair cards too. I have an idea for the “tells a story” aspect so will probably use another for the presentation so it all depends on if I can finish the wolf in time

Skin800×442 3.22 MB
Decided to share a quick gif on how I did the skin incase anyone finds it helpful 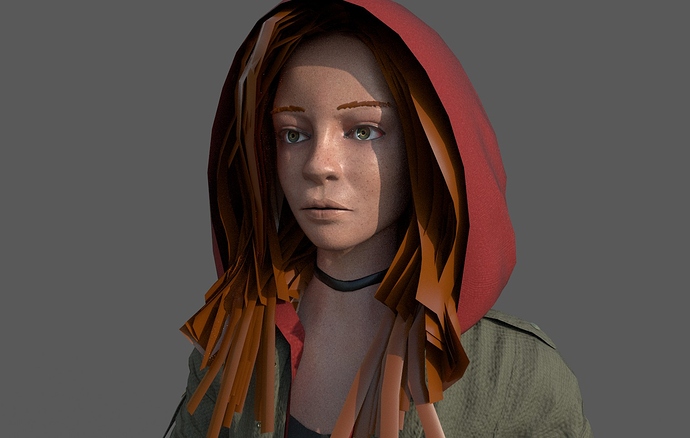 The blend layer for the color zones might be a little too strong so might adjust the opacity values a little but with this my pilot should be done. On to the wolf! 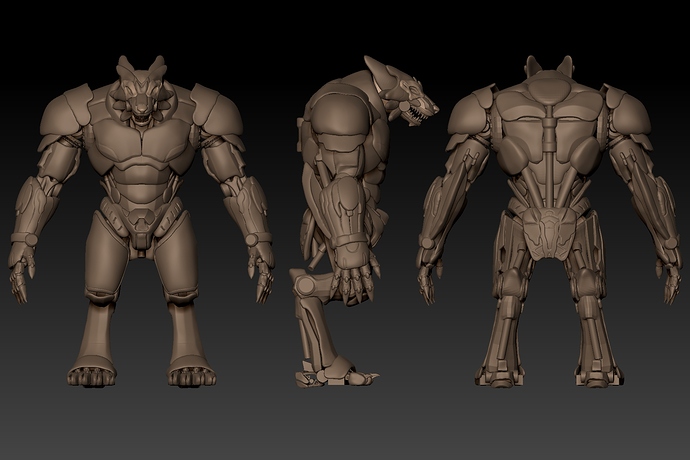 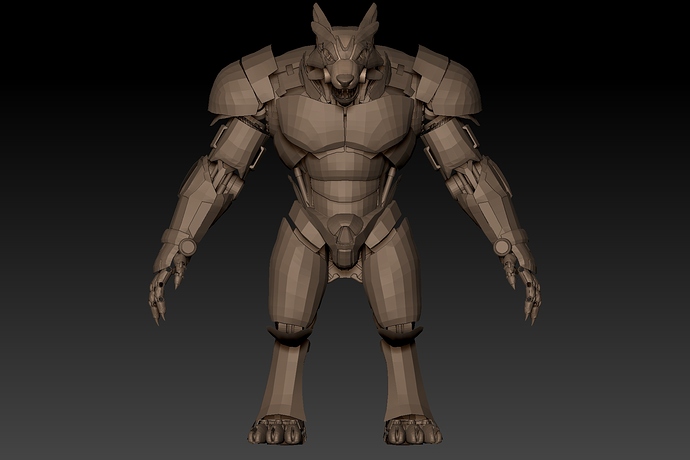 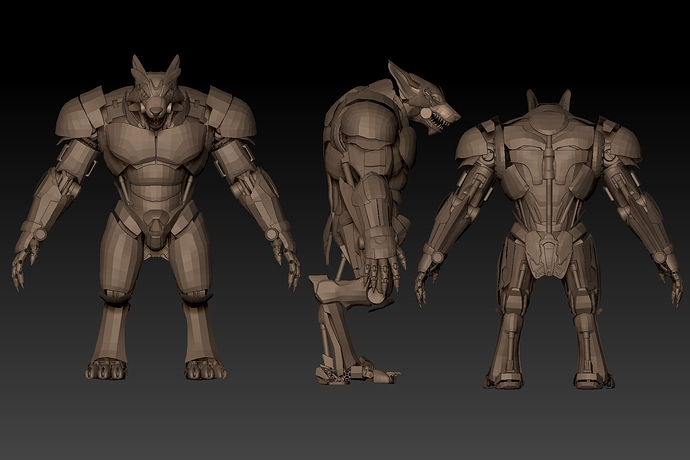 In hindsight designing and modeling my own wolf mech in a month may not have been the best choice in a competitive setting. Too ambitious, I finished his retopology but no matter what tricks and techniques I try I can’t get seem to bring the polycount down anywhere close to the competition’s max limit. Unfortunately.

So looks like my Mech-Wolf will have to be a portfolio piece, I’m sorry to those who were looking forward to seeing him here. I’m still going to see if I can try salvage something to submit in time but I don’t think it will be my giant wolf mech